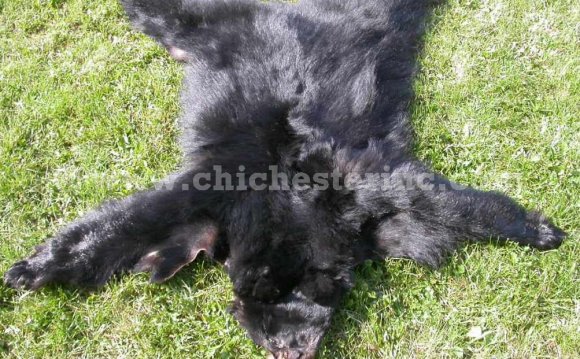 Note:This is not a substitute for the Alaska Hunting Regulations. For more complete infomation read the regulations and the permit hunt supplements. They are available at Alaska Department of Fish & Game offices and establishments that sell hunting licenses and tags.

Knowing the proper skinning techniques for bear can make a great difference in the final product of your bear skin rug or mount. The following guidelines are the most accepted bear skinning methods used by taxidermists.

Make your preliminary cuts along the lines indicated above. These lines generally correspond to those locations where the hair begins pointing in different directions. Remember, in most areas of the state you are required to leave evidence of sex (penis sheath, vaginal oriface) attached to the hide.

Cut around the pads of the feet to the edge of the hair line, as indicated by the dotted line. In most parts of the state, the claws must remain attached to the hide when it is presented for sealing.

Skin the paws down to the last digits. Then separate the claws from the toe bones where shown in (A) at left.

Skin the bear to the back of the head. The ears will appear as lumps on the sides of the skull (B). Grab these lumps and separate them carefully by cutting them off as close to the skull as possible (C).

Continue skinning carefully to the eyes and cheeks. Insert a finger to the eye socket from the fur side so you can feel where you're cutting. Carefully cut through the membranes around the eye, as close to the skull as possible at (D). Next cut through the cheek tissue to expose the teeth (E).

Separate the lip tissue from the gums close to the jaw bones, leaving lots of inner lip tissue on the hide (F).

Try to get the hide to a taxidermist or into a freezer right away (within one day in warm weather or two days in cool weather). If you can't, remove as much fat and flesh from the hide as possible and salt it heavily, especially around the face and in the paws. You should use about 20 pounds of salt on an average black bear, 40 pounds on an average grizzly, and 80 pounds on an average brown bear. Ask your taxidermist to show you how to split the lips and eyelids properly and to turn the ears inside out before you go on your hunt. This will also help prevent spoilage.

Remember, NEVER store or transport raw hides in plastic. This is the fasted way to make the hair slip from the hide. Always store raw hides in burlap or in game bags out of the sun in a cool dry place.