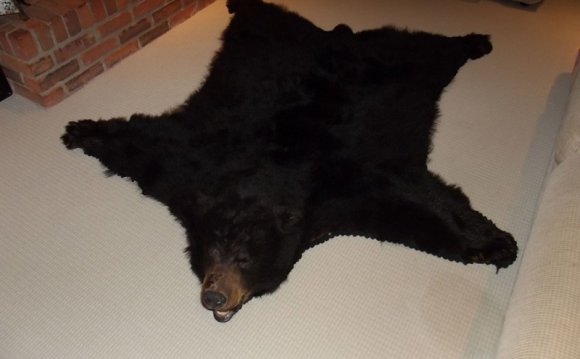 A number of readers have sent inquiries about the the bearskin hat Prince William (and Prince Charles and the Duke of Kent) wore during the recent Trooping the Colour. Are they really made of bearskin? How big are those things?! How do they stay on? Why do they wear them? Why do they have different coloured feathers in them?

Yes! They are made of real bear skins by royal warrant holder Patey (London) Ltd, who make ceremonial hats for the British Royal Family. The hats are 18 inches tall, weigh approximately seven pounds and are made from pelts of Canadian female brown bears (the brown bears have thicker fur than black bears so these pelts are simply dyed black). An entire bear skin is needed for each hat which puts the cost of each one around £650. The caps are diligently maintained and last for decades (some are reportedly more than 100 years old).

It all goes back to 1815 when the 1st Regiment of Foot Guards defeated Napoleon’s French Grenadier Guards at the Battle of Waterloo and celebrated their victory by stealing their imposing fur hats. When they got back to England, they were renamed the Grenadier Guards (the name they still have today) and their uniform was changed to include these tall fur hats as a permanent reminder of their victory. Today, there are 5 regiments and each one has a special coloured feather plume in their bearskin to distinguish what regiment they belong to. Prince William, below, is part of the Irish regiment, whose bearskins have a blue plume. The Coldstream Guards have a red plume, the Grenadier Guards have a white plume, the Welsh Guards have a stripe white-green-white plume (see Prince Charles in a Welsh Guard Bearskin here) and the Scottish Guards have no plume.

How to skin a Bear in the Field