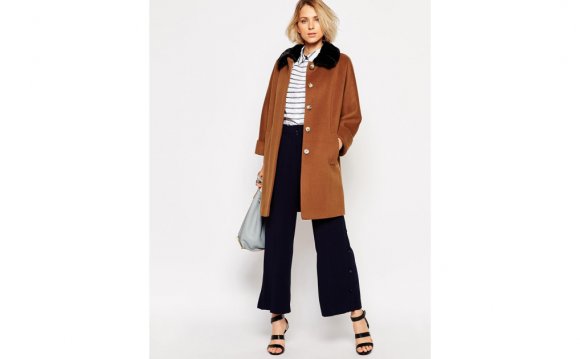 When I moved to New York from California in 2003, winters were still mercilessly freezing. So I acquired outerwear — a citron-hued cocoon purchased end-of-season, an orange puffer from Patagonia's kids' department, a leather jacket, a trench — but never found a single, go-to, all-purpose coat. The casual ones felt meh and the fancy ones didn't work with my daily uniform of jeans and Supergas.

So last fall, when I visited my mother in St. Louis and she offered me a shopping trip in her closet, I dove in. Most of my mom's coats were variations of mine with one exception: the furs. I wasn't sure I wanted one. Plush and pretty as fur is, there's no denying its origins. But the furs were just hanging there, looking beautifully warm. And they were already dead. Remodeling one seemed ethically, environmentally, and (relatively) economically resourceful.

Here's how I updated my secondhand fur, and how you can, too.

1. Find a Coat and Sleuth Out Its Origins. If the fur is vintage, make sure the material is soft, supple, and isn’t shedding. If the fur is mom's or grandma's, ask where she got it and which animal it came from, because the furrier will want to know. I pulled a short-pile jacket with a small, spotty pattern from my mother's closet. But when I put it on and looked in the mirror, the dolman sleeves, blouson body, wide lapel, and double-breasted closure were straight out of Absolutely Fabulous. My mother told me it was stenciled muskrat and opened the jacket's right side to reveal a Neiman Marcus label. In the lining, her married name was embroidered in pale silver cursive. I warmed to the jacket. "You can do whatever you want with it, " she said, reading my mind as moms do.

2. Find Your Inspiration. I never used Pinterest until I needed to organize visual references for altering my fur. When I looked at new furs from labels like the Row and APC, I gravitated to clean lines and smoother hair than my mother's muskrat. Though I was learning about my preferences, I still needed references that resembled what I had to work with. I found a mid-thigh shaggy chocolate fur with Cat Power bangs and black tights, spoke to me. "This is the way you will wear your coat, " it said. I pinned the photo, then printed out all my references and notes about what I liked about each one for my trip to the furrier.

3. Find Your Furrier. If you’re not aware of a local furrier, you can find one on Fur.org (ask the furrier if they do remodels) or check with any Neiman Marcus fur salon nationwide. Regardless of whether the original came from Neiman's, the salon can arrange for Wally Dongo, Neiman's specialist in Chicago, to update your coat. Here in New York, there are still a handful of furriers on 29th and 30th Streets between Sixth and Eighth Avenues, in what was once the city's booming fur district.

First I tried smaller furriers like D&E Furs (224 West 30th Street, suite 407, 212-279-4405) and Anamoda Furs (150 West 30th Street, 6th floor, 212-695-6936), but this was December and the highly recommended shops were booked through the New Year. Anxious to have my coat for the holidays, I called Madison Avenue Furs — a sizable operation that specializes in remodels — and spoke to a fellow named Mitch Cohen. He estimated that a "cut-down" of my coat could be done in a week and would cost between $550 and $650. Reworking the collar would run around $150. I had a bit of sticker shock — that was more money than I have ever spent on a single article of clothing — but agreed anyway.

4. Have a Fitting. Communicate. "Was your mother a bigger woman?" asked Mitch as I pulled on my coat in front of a three-way mirror. When I told him she was not, he said the coat's 1989 vintage explained the oversize silhouette. Mitch placed a plastic clip under one of my batwings, and noted how many inches to remove from the body and sleeves. I showed him my Pinterest printouts, explaining what I liked about each one, and also pointed out the straight lapel I liked on a coat hanging in the showroom. Mitch would manage the remodel with one of several contractors in their network, and would call me for a second fitting before sewing the lining back in.
5. Expect Some Back-and-Forth. The second fitting was mildly nerve-wracking because the coat's gray lining hadn't yet been replaced, leaving the suede backs of the muskrat skins exposed. The sleeves still had more of a blouson feel than I'd wanted. Sensing my distress, Mitch called over Charlie Polihronakis, the furrier executing the work, to listen to my concerns. "Take it off, " Charlie told me, turning to Mitch. "Give me a knife, " he said. "Sharp." With a gold-handled blade, Charlie pricked along the suede side of one cuff, removing it altogether. The newly shortened sleeve hung straight.

6. Use the Leftovers. A week later my coat was ready. When I picked it up, an Audrey Hepburn look-alike was trying on a trim, cream-colored mink jacket that was once her husband's grandmother's voluminous, full-length coat. For $900, she had the coat "cut down" into the jacket, then used the extra length to make a scarf for her sister-in-law. My remodel had left a series of smaller pieces, but one of the Madison Avenue Furriers piped up, “We could make you some earmuffs. No charge.”

7. Enjoy. When Mitch unzipped the garment bag holding my coat, I saw Charlie had left the retro Neiman Marcus label in the lining, as well as my mother's monogram. When I pulled it on, the shoulders still felt round, reminiscent of their original cut, but nowhere near as large. The body hung straight, as did the sleeves, and it didn't look ridiculous with jeans and Supergas. That's just how I wore it on the airplane, back to St. Louis to visit my mom. She was impressed with the jacket, and she loved her new earmuffs.