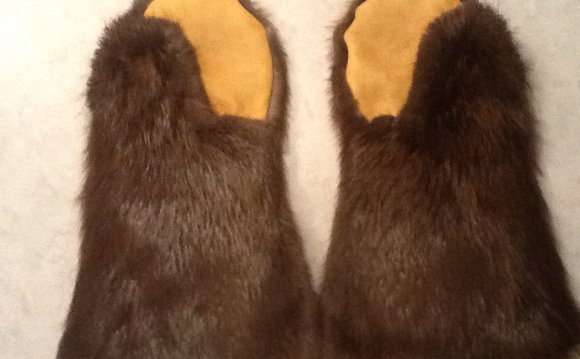 There are many old photographs of certain Omaha-Ponca Hethuska or Osage Inlonshka members wearing a turban of otter fur, or a turban of red fox fur.

“The otterskin hat, rather than the war bonnet, was the ‘chief’s’ headdress, while a similar headdress of fox fur marked the experienced warrior.”
(Howard, 1965, p. 66)

While in “The Omaha Tribe, ” Fletcher and LaFlesche states,

The red fox fur turban was usually narrow and plain, giving the appearance of a large headband and were sometimes worn in combination to the hair roach. Sometimes these small turbans were also made from otter fur as well, depending on the tribe.

In contrast, the highly decorated otter fur turbans however,

“...was a wide band of otter fur which encircled the head like a crown. The top was left open, and if a warrior wished he could place an eagle feather in his scalplock and let it stick up through the cap. The tail of the otter was attached to the rear of the cap in such a way as to hang down the warrior’s back. Sometimes the edges of the cap and tail were beaded, and a tuft of dyed horsehair was appended to the end of the tail.

Four round beaded targets were also attached to the wide band of the cap for decoration.”“While some of the southern tribes wore a slight variation of the cap just described, the hat most unique to the southeast had a huge hide triangle, with beaded or painted (or ribbon appliqué) symbols on it, which extended out to the left or right side of the wide headband.”...“Such hats were worn by the Pawnee, Ponca, Osage and Oto warriors.”
(Mails, 1972, pp. 385-387)

As already stated, the otter fur turbans were worn only by the Ponca chiefs or sub-chiefs and,

Today, fur turbans are seldom seen among the Ponca Hethuska or the Osage Inlonshka members, though they seem to becoming more popular at pow-wows.

Fur Hats - See How They Are Made

making of the FOX hide hat.wmv